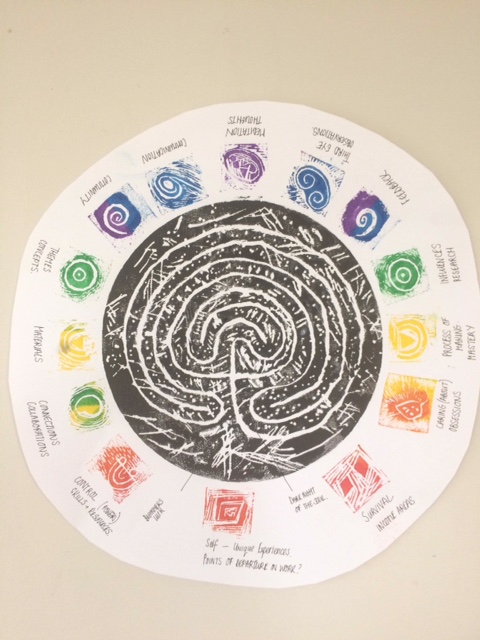 During a power cut I took the quiet time to brain dump initial thoughts into my notebook.

When I scribbled the word ‘symbols?’ I realised that I already had a template to work from. I pulled out an old test print from the petroglyphic portrait print session. And started matching the categories from the mind map to a corresponding symbol on the print.

It made sense……..for a while, and then I doubted it and fiddled about the composition. How would it work. For the last 11 years I’ve been running Abbey Art Studios, my mind was very focused on setting it up as a business, developing workshops and classes, reaching a market, and earning an income. It pays for Susan Farrelly to faff about with art, do MA’s and mind maps. Whereas Susan brings the product. A symbiotic relationship. So who/what was this new map about?

As a high level exercise the mapping tool with XMindZen was rather useful. It was a clean tool and in no time I’d knocked out something logical. It uses the Tony Buzan approach to colour coding which helps me see strands better. I felt all corporate and efficient but it didn’t have enough meat in it to satisfy.

I felt ready to write out more specific ideas to scrub into categories later once they were out of the head.

I did a few stages of these. After each brainstorm, the act of scrubbing them into categories triggered more associations and ideas. I started new ideas on different bits of paper and kept adding them in. After 3 rounds I decided to resolve and differentiate each category to a coloured tube of paint.

There was a map within the map. The colour mapping system matches each colour, to symbol, to mapping practice category.

The next stage involves sticking everything down on a large sheet of paper to live on the studio wall. As I have no idea where its going next and that’s fine for now.