Assembling the ‘girdle’ is a slow, small, quiet job. The stitches must be strong and unseen to anchor the strips to the flannel panel. There is a precision and order to creating them. I find my breathing slows as I concentrate on the space between the stitches.

The assembled object is interesting. It has potential to do things. What things?

I asked my daughter if I could borrow her. I wanted to see the ‘girdle’ in place. She must want to do this with me too. She has a hypersensitivity to materials, texture and touch so I get a very strong ‘reading’ from her about the work. She likes being ‘in’ the moment and working me as we are there together. It changes as the lengths of strips constrict and bind, restrict and tie up. Her body responds, arms moving against the binds. The mood in the work changes as the unraveling begins, it is a puzzle – a labyrinthine set of options to unpick from the entangled situation. Overall though (and ethically) it feels wrong to bind others up with it. 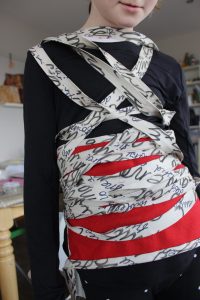 I can imagine lots of opportunities for potential performances with this object, me in it and others assisting/choreographing the raveling and unraveling – maypole like. This I will expand in my notebook and let hatch until more possibilities with public exist.

Girdle, stomacher, apron, bib, dudou*, harimaki**, Yem (Vietnamize undergarment similar to a halter neck) . Wrappy, stomach bowl, little wrap, thing that wraps the belly. I looked about for other names, descriptions of something similar from other cultures and places. It reminds me that our perspectives are often similar and shared. *The dodou is an ancient Chinese undergarment (characters describe it as stomach bowl, thanks Bowie). The red dodou is best for warding off evil spirits, small pockets can contain ginger and musk to preserve stomach qi. It can be embroidered with symbols pertaining to your particular health need (Seed symbol for fertility). The Japanese Harimaki**or Senninbari Harimaki (1000 stitch belt) is an amulet given by women to the male soldiers going away to war. A bellyband worn about the midriff for health/fashion reasons.

““Then she lent me her red flannel petticoat until I should get one of my own, and showed me how to fold and pin the cloths, and said hat some called it Eve’s curse but she thought that was stupid, and the real curse of Eve was having to put up with the nonsense of Adam, who as soon as there was any trouble, blamed it all on her.” Margaret Atwood Alias Grace.

Scarlet red wool flannel was died with the shell of a beetle and therefore more expensive than the duller reds obtained from the madder root. Red shirts were taken with the Voyage of Discovery in the early 19th century but these should be looked at as unusual for the 18th century. Red flannel jackets for men and petticoats for women were common in both England and New England. In The Pennsylvania Packet of 1773 “Ran away . . .  a mulatto wench . . .  had on and took with her . . .  a red flannel quilted petticoat”. As cited in Wives, Slaves, and Servant Girls.