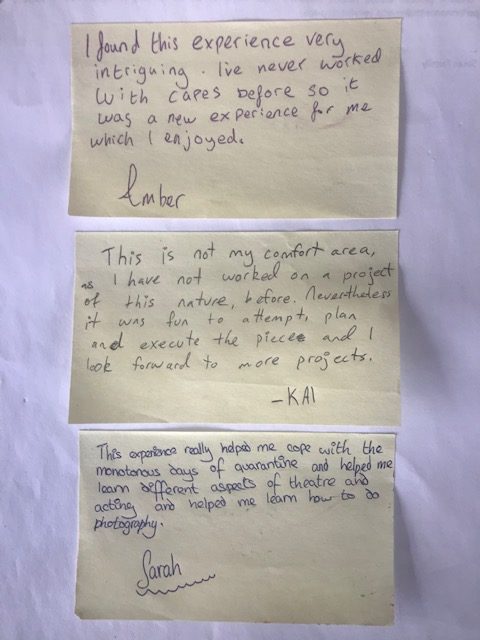 The Reliquary box was delivered on the 29th of April and collected on the 8th of May. During this time Amber, Kai and Sarah produced this video. I was delighted and amazed by what they created given the restrictions of C19. I was not expecting an edited work, complete with it’s own mini narrative. I particularly like the way they took symbols from the aspect cards and decorated their faces, of their own accord. Their dog Rio insisted that she made a cameo appearance. She is a like a modern day wolf! Interestingly Hecate is associated with hounds.

” Hekate is associated with many members of the animal kingdom, but perhaps her infamous hounds who patrolled the night with her and guarded the gates of the Under World are her closest four-legged companions. ” https://www.patheos.com/blogs/keepingherkeys/2018/05/hekates-hounds/

I asked the girls to provide some thoughts, responses to the encounter and include in the box.

Intriguing, enjoyable, uncomfortable, entertaining, moments of learning and gained personal experience. This was a satisfactory result.

Currently the raw footage is with writer Connor McGinnity. We have been in correspondence regarding the soundtrack and I look forward to seeing the next iteration of the work. We are considering engaging another person, Conal Duffy, a musician that plays the Uileann Pipes.* I find the drone, the part of the pipe that produces a prolonged note that sits below the melody entrancing.

For anyone interested in what they sound like, here is a link to Seamus Ennis – The Gold Ring, as Gaeilge, in Irish.

*Uileann Pipes are the national bagpipe of Ireland – literally meaning pipes of the elbow. The Uilleann pipes is the Irish form of the bagpipes – a family of instruments with representatives throughout Europe as well as parts of Asia and Africa. It emerged in the first half of the 18th century in Ireland and Britain and was developed to its modern form in Ireland over the following 50 to 60 years.
It is the most highly developed of all bagpipes, having a chanter capable of sounding two full octaves, as well as other features not found on other bagpipes.