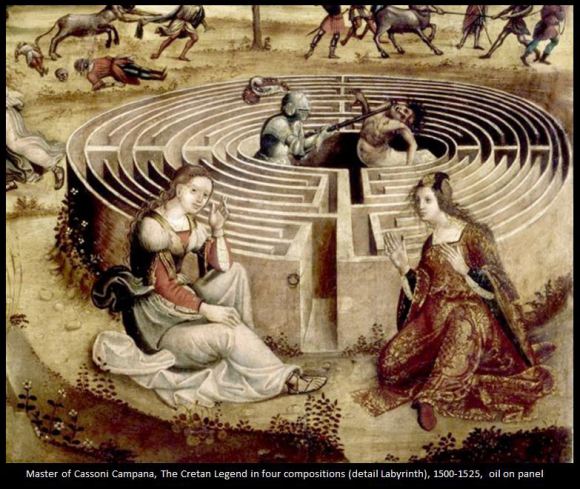 Mondrian – Dam & Ocean 1915. All memory of the original subject matter is lost.

Picasso – Minotauromachy 1935. Full of symbolic content and produced during a period of turmoil in his personal life. A visual source for Guernica?

Escher – Relativity 1953. A place where rules don’t exist. People existing in different planes, unaware of each other.

Haring – Labyrinth 1989. Explorations of the human condition. “Reality of art begins in the eye of the beholder. Imagination, invention and confrontation”

Bourgeois –  Labyrinthine Tower 1962
‘The spiral is an attempt at controlling the chaos … It has two directions. Where do you place yourself, at the periphery or at the vortex?’.

Paola Epifani/Rabarama – Giro de Vita 2013. The tension between the fate (on a genetic basis) and the free will, the dilemma of finding the solution, the mystery and journey of liberation. Alienation of the individual.

Kubrick – The Shining. Jacks descent into madness is represented by the labyrinth.

Del Toro – Pans Labyrinth. Del Toro says it is “A movie about a girl who gives birth to herself in a world she believes in. A labyrinth is essentially a place of transit, an ethical moral transit to one inevitable centre”

Henson – Labyrinth. A quest to find a lost brother.