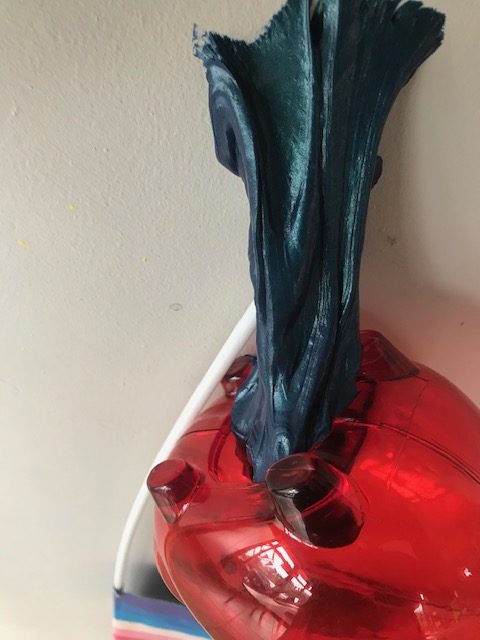 Find 3 things……. (Found that I had to establish rules with myself: steered away from my previous red things (Red material/Coat/Wax), overtly precious things, and cool things that already looked like they were art, I wanted things I could find easy and I asked my daughter to give me a red thing she didn’t want)

1.   Usefulness – Flag, kinetic with intervention, can be waved and moves. But flat when not being used. Performative?

4.   Aesthetics – Flag, attracted to the rainbow of colour (easy criteria)

5.   Potential disruption – Money box, I didn’t pick it. Money box with a hole in it-useless and compromised. Box isn’t rectangular (seeing material correlations ‘Box’ I am working with rectangular boxes and reliquaries at the moment. )

6.   Scale – All of equal size, domestic scale but if putty image was enlarged it would be more grotesque

7.  Resonance – Initially I thought the rainbow flag, the colours and how it symbolizes diversity. But having thought about it more, I like the imperfection of the kitsch pig shaped box the futile hole compromising its function.

Myself and B attempted a call to complete this exercise together but her camera wasn’t working. We’ll pursue it further dialogue via email correspondence.

Materiality – Task 1 turned into sculptural response with the material and an exploration of the materiality of body. Holes. Umbilical. Red, colour of bodily fertility. Hanging, anchoring and tethering. There was more performance in the putty than the flag, which seemed to disappear in the narrative of the assembly.

Affect – A tension, raw experience of bodily memory, seeing something being birthed. Initially I didn’t see the suppression of the flag in the image as a domination of hetero over gender diversity, but would be concerned that it ‘could’ be perceived that way in the framing. Cropping the image further could resolve this? (Thx to B for this astute observation)

Attention – captivated by the duration of the work, waiting for it to drop and disintegrate. Temporal ‘thing power’ (Jane Bennett) and how it held my attention for 6 minutes and 42 seconds. The energy of that intensity dissipated after it fell.

Changed values – the transient dialogue between the hole in the money box and the blue putty umbilical took me to a place of thinking. I was surprised by this, I wasn’t overly enthused to have to do this exercise (irked almost) but was shocked at the overriding themes of the biopsychosocial body that revealed itself to me through drawing/automatic writing in my notebook.