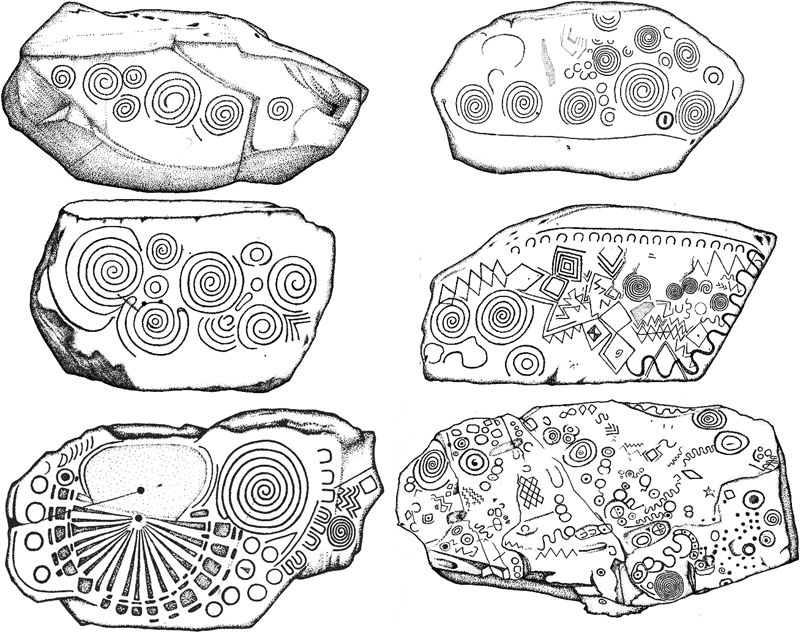 Neolithic Art (dating back over 5000 years), particularly the symbolism in mark making and their sculptural forms hold a huge fascination for me as an artist. As a teen I rambled through many field in search of standing stones and passage graves. A habit I continue as an adult. The North East of Ireland, where I live was a neolithic mecca.

“The mounds of Newgrange, Knowth, and Dowth appear in the earliest Irish literature. The area was considered the domain of the Tuatha De Danaan, the earliest known native Irish gods who had descended from the skies to inhabit Ireland, disguising themselves as a supernatural race of wizards and magicians” L.Darcus

Their sculptures had a ritualistic function but the carving remained minimal and basic. To produce something too representational would invoke unwanted magic or a crossover to the spirit world.  Spiritual possession was often cured by Trepanning, removal of a bone at front of the skull. The cult of the head was key, they believed that consciousness existed within the head.

Both these heads feature a small hole in the base so it may have been mounted on a staff or pedestal during it use. The flint used in the Knowth mace head originated in the Orkney Islands in Scotland 4000bc, evidence of trade and travel in this society. An unusual Pelta spiral imitates the eyes, while a single spiral both sides creates the ears. Grooves at the base suggest a beard. To achieve these details on such a small item a drill like tool would have to have been used. The Corleck Head 3-2C.BC is a crude hairless sandstone three faced head. 1 mouth has a hole, 1 face has a furrowed brow all created from single block incision carving. Sacred tripilism, similar to the Roman God Janus features here. The human head was an important symbol in this culture, venerated and believed to the centre of spiritual power. A magic box that contained the soul, power of consciousness, ritualistic and that that held protective powers.

Decorated surfaces from the Neolithic era are scattered with mark making.

The interpretation of the tomb art can be broken into four main themes: miscellaneous interpretations; decorative; altered states of consciousness; and astronomic/calendric.

I looked closer at the calendric markings , intrigued at the idea of marks denoting a calendar of events using no numbers, dates or times just visuals.

Some researchers have considered the possibility that by being in an altered state of consciousness that the human brain communicates with a set of programmed symbols. Is this the code of being an artist?  The following information is courtesy of https://www.knowth.com/megalithic-art.html. I never copy and paste such large passages but this has been expertly described by Laurie Darcus. Context would be lost if  I interfered with the flow.

Lewis-Williams and Dowson (1993), and Eichmeier and Höffer (1974) (cited in Lewis-Williams 1993: 55) have established a neuropsychological model where during altered states of consciousness, geometric entopic phenomena (often referred to as phosphenes), intrinsic to the human nervous system, are “seen” by those in the altered states. The theory has been successfully tested both under laboratory conditions and in ethnographic situations, and the stage I entopic component of the neuropsychological model seems universal.

The geometric shapes that are produced during the first stage of altered states of consciousness match those found in Neolithic art. The meanings of the shapes would have been formed culturally and now difficult for us to determine. The function, however, might be explained as a form of political power. Where altered states are common in the rituals of a society, a set of elite may seize control of the “special” experiences as a means of expressing their society’s ideology and justifying their elevated status. This status would allow further control of resources and labour (Lewis-Williams 1993: 56, 57, 59, Lewis-Williams 1990: 407-408).

A contrary view on phosphenes comes from Hodgson (2000) who argues that the there is an underlying neurophysiological causative factor in the recognition of simple lines and phosphene type forms. The primary cortex plays a central role in the processing of visual information and would be connected with the making of geometric shapes in early human art, even without Shamanistic type ritual.

Altered states of consciousness is taken further by Dronfield (1996) who proposes that the tunnels of the passage tombs, and the concentric circles and spiral motifs found in megalithic art, are indicative of the ‘tunnel experience’ of altered states. The tunnel provides a means for accessing supernatural worlds, and the realm of the dead – allowing communication between the living and ancestors who have passed on. “

So here I am, sitting thinking of all the connections I am making (and also other member of the cohort) between art, neural pathways, tunnels, labyrinths, mazes and all the events in between. Journeys that have been traveled and communicated with mark making past, present and future.