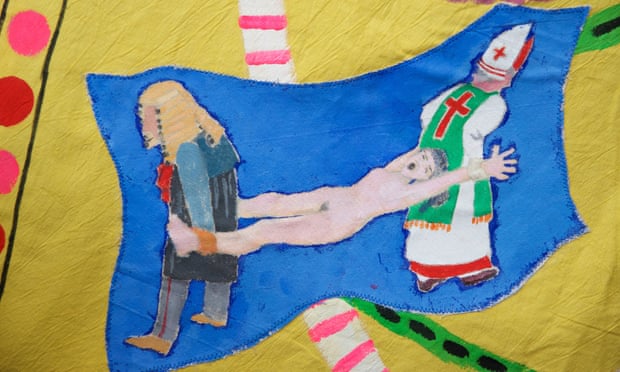 How does Christian art depict women and their bodies? Our agreed provocation took me on a trip into history, lived and read. What exactly is history in the context of religious art, and does the history of the depictions of woman and their bodies mean the same to the artist, the pilgrim and the western academic, the male and the female gaze? They are all very particular sets of narratives which demonstrate how history is constructed, too wide to present in this ‘drive by’ provocation. Research is an active process and I have tried to reflect upon and understand my own position using a multivocal response – locate my own personal, political position as a researcher and make explicit that where I am located culturally positions me within a particular framework of Celtic Christianity. I have performed many rituals, now part of my own history as a woman within this Catholic ethos. I have turned my back on the submissive female archetypes and sought out the fearless ones, who positively embrace the narratives within Christian art around women and body and through it find creativity as an alternative salvation.

The topics by which we will attempt to explore in our provocation are, the representation of gender and genitalia, depictions of domesticity and female archetypes in artwork featuring Christian themes.

I’ve often felt gender is an intentionally ambiguous fluid thing visually in religious art – if he doesn’t have a beard he almost looks female. For example: Angels although male in biblical literature are not portrayed as overtly masculine. Is this androgyny portraying their lack of sexual consciousness, or attempting to speak of something more mysterious, more spiritual or free from the earthly constraints of gender politics? This fluidity has always allowed me a free, gentle acceptance of the images as depictions of a human interaction and not a focus or elevation of a character.

In previous research I have explored the stone Sile na Gigs. Siles’ stone vulva is often found splayed and open above the doorways of our Celtic Christian Churches. Despite her links to pre Celtic goddess worship the Siles’ spiritual homes were sanctioned by the Roman Catholic Church to adorn the buildings, though some were destroyed and defaced as their nudity was seen as vulgar. The form that the vulva takes, an opening, a portal is echoed in a stylized almond shape know as a Mandorla. The Mandorla is an ancient symbol representing union (sexually or cosmically). It is said to be inscribed on the Arc of the Covenant. It appears in vast amount of Christian artwork as a halo of energy surrounding figures of Christ and Saints.

Barbara Walker in her book “The Woman’s Dictionary of Symbols and Sacred Objects,” states under the subject Sheila-Na-Gig:

“Female figures prominently displaying the yoni [female genitalia] as a vesica piscus [Mandorla] were once common ornaments of Irish churches built before the sixteenth century.

Going to mass was often our first frequent exposure to original artworks in Ireland- ornate architecture, carved stone object, precious metal chalices, paintings and stained glass windows. For me the luminosity of the windows was an endless, changing surface animated by light. Harry Clarkes work is one of the most striking examples. Commissioned by Sister Superior Mary of St. Winifred in 1926 the window is named ‘Our Lady of the Sorrows’.

You can see here the vulva like Mandorla dominating the composition. The Virgin Mary has a strong presence, a forward facing piercing gaze. The lower inscription features the latin ‘Sabat Mater’ which translates to The mother was standing. Nothing submissive evident here but a deep empathy for the domestic stuff of life – death, loss of a child and sorrow.

When you reclaim imagery, you take the power back.

Alice Maher an artist I admire, said we must reclaim imagery “The arts at its best allows discussion, allows people to experience something, look at it, listen to it, consider it for their own selves,” says Cecily Brennan. “It opens places that haven’t been open for a long time. That was our experience about the debate about abortion – it had not been public. Art helped to bring it out in a different way.” In our provocation we probed each others theories, we investigated different depictions of females in Christian themed art works. We tracked their changing status through history. We interrupted our own lived experiences of religious art with deeper research of alien subject matter. We intervened and questioned populist approaches to analyzing Christian artwork. I’ve tried to present ideas that don’t sit comfortably with me and in doing so found some empowered female archetypes, inspired by, commissioned by, created by women…. all hiding in plain sight in the layers of Christian Art.

(Thank you Elena for working with me on this Provocation)