Triadic Goddesses and the Triple Spiral 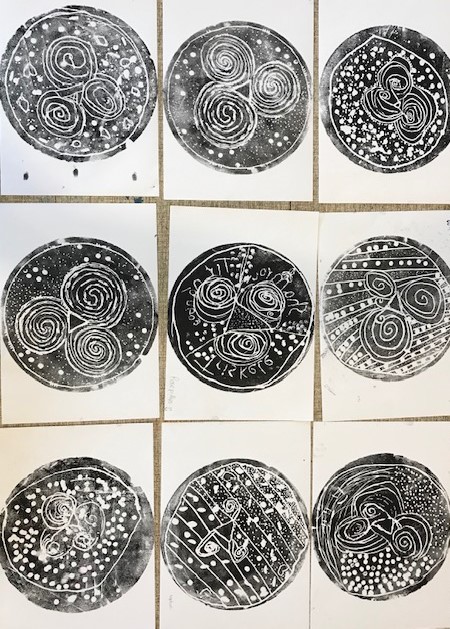 One speaks of individuality, two speaks of duality and 3 speaks of otherness.

Triple symbols are prevalent in ancient cultures, the mystic qualities of the number 3. Nicolai Tesla was obsessed by the number three, completing tasks three time to ensure success. Third time, lucky! Indeed most rituals are preformed in threes for strength. Pregnancy is measured in trimesters. Three is the triple spiral – the earth, the land the sea, the oldest example dates from 3200BC. Speculation that it could represent the physical, spiritual and celestial worlds. Evolving later into the familiar Shamrock by 432AD (thanks to St. Patrick) and used to describe the father, son and the holy ghost. Easy to see where he got his inspiration from. Re-branding an already established tradition.

Sometimes goddesses appear in single form, but frequently we are to imagine them as a triad, i.e. an individual goddess in her three different manifestations. There is, for example, an Irish pre celtic group of triadic mother goddesses concerned with the prosperity of the land, childbirth and war. The trio of tutelary goddesses Ériu, Banbha and Fódla are almost identical eponymous personifications of Ireland. Then there is the triplicate war goddess, the Morrigán, Badb and Macha. Anú, Danú and Tailtiu, the Earth goddesses. Interesting triple aspects in ‘Shee-Gods’ represent their mastery, not their roles in society. Brigid is known as a Poetess, Healer and Smith (Blacksmith). In Greek mythology Hecate is a triple goddess. (I have a wild black cat friend called Hecate – named for the offerings she leaves on the doorstep.)

It could be argued that the Patriarchal view of the triple pushes the female into subservient roles – typified by Freud and his Virgin, Mother, Crone. I remember my mother and her friend Mary joking once that the only three parts available for women to audition for in Irish theater was that of the archetypal virgin, mother and whore.

As a contemporary Irish woman artist I feel I/we have a duty of care to undertake, to reclaim unrepresented experience, female or otherwise, envisioning a different future through dialogue with the past – a process of asking questions together, reassessing the dominant narratives of history and cultural memory.

As a cultural model a matriarchy is non hierarchical, with horizontal societies of matrilineal kinship. Economically they focus on balanced reciprocity and generosity based on the circulation of gifts. It is always egalitarian and believes in consensus. This is what I aspire to in a participatory practice.