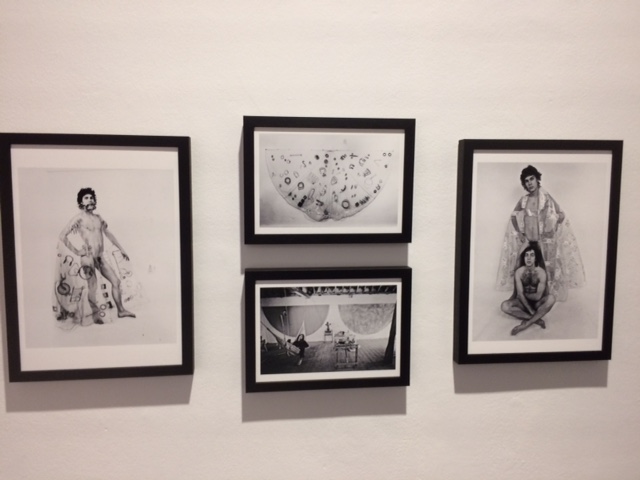 I was first introduced to Derek via Chroma, his book on colour and I was hooked. His writing style, so visual and poetic brought me great joy. So when his retrospective opened at the Irish Museum of Modern Art, a visit was a must.

Derek Jarman, British artist and filmmaker, 1942-1994. The exhibition focused on his wider practice, painter, writer, set-designer, gardener and political activist. It’s the first time that all these diverse strands of his practice have been brought together in over 20 years. In light of our recent ‘YES’ vote in the Equality referendum, it was very very emotional. This insight into his engagement with art and society, his contemporary concerns with political protest and personal freedoms arising from the Aids crisis was pure inspiration.

Myself and Derek clicked right away visually. Previously I was only really acquainted with ‘Words Derek’. Visual Derek did not disappoint. From vulnerable studio experiments to slick stage production. Celebration of body, movement, form and colour. He was the pop video and art maker to the soundtracks of my teens – The Clash, The Smiths, Pet Shop Boys, to name but a few.

An area we have in common. He played with capes (which was a lovely surprise). Skycapes – Sky coloured pieces to mirror the calm of a beloved summer. Wall hung. Cardinal Capes – A see through skin of money and power. A costume for performance.

*In his 1999 biography of Jarman Tony Peake traced the form and concept of the cape to Jarman’s theatrical work, particularly his ideas for a production of The Tempest:

Capes are both practical and sensual, especially when cloaking nakedness. They are geometric: if hung on the wall, they form a half circle. They have mythic overtones: by donning a cape, the wearer can effect a transformation. These qualities, particularly the latter, had considerable potency for Jarman, who now set about working and reworking this new possibility until the capes he produced-and began to hang on the walls of his studio-no longer resembled design, but approached the condition of painting or sculpture.

For my holiday reading I purchased ‘Modern Nature’ written by Jarman on the subject of his garden at Dungeness. A remote, desert like area situated near a nuclear power station. The garden he created here after his HIV+ diagnosis became a spiritual retreat and creative space for his coping/healing. Throughout his life Derek created these escape houses, spaces to be alone, reflect and be in. I have 20 pages left to complete of this diary. I am touched by his descriptions of pain, sex, hurt and rage. I’ll be sad when the book comes to an end. Lucky there is an extensive collection of his films and other books that I can read and look at when our holiday together ends.